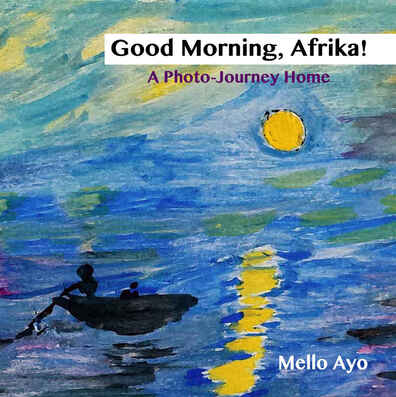 Watch Good Morning Afrika Video
Video written, directed, produced by Mello Ayo
Mello’s most recent publication is Good Morning, Afrika! self-published in Fall 2016. A photo-travel journal, Good Morning, Afrika! is based on a trip made to Ghana in October 2015. While travelling, Mello kept a journal to record his experiences. At first, the exercise of keeping a daily journal seemed insignificant beyond the personal. However, as time went by, it became profoundly clear that something unmistakably monumental and profound was unfolding. The journal at first glance was an attempt to record. However, it soon became clear that a deeper monumental discovery was about to be made. This is more than a photo-journal. Rather, this is an act of self-discovery. The journal reads like a meditation; it reads like a community restoration project of remembrance, and forgiveness, dedicated to the healing of old wounds and to the transcendence of history.

​“Travel far enough, you meet yourself,” said David Mitchell, author of Cloud Atlas. Reading this photo-journal is akin to travelling without having to leave where you are. Like Mello Ayo, on this trip you may meet yourself and discover even more.
Excerpt: Cape Coast
In the shadows, I imagined the sight of slave ships overloaded with Africans in chains. Below in the dungeons, I could hear the silent desperate cries of horror, cries begging to be free.  And yet, down through the upper doors and windows, a light shone, light coming through darkness inviting us into a new freedom. So tranquil, so radiant and so ultimately redemptive, the sunset had its own story to tell, a story the tour guide could not impart. It was eerily beautiful. Here where some of the worse crimes against humanity were committed in modern history could be seen some of the most beautiful vistas. It was as if nature was saying “follow me,” offering a new way, a way to true reconciliation, healing and peace.
In one captivating scene, the cannons faced the roaring sea. The weapons of war stood like a fortification insisting on violence, oppression and the militarized defence of capitalist mercantile interest. But the waves roared back in full counter attack, solid and strong. We may be soft and yielding but we will not stop, for you can’t stop us; we will always be rolling, waving up on these shores to wash away all fears.

In another scene, the same cannons confronted the sunset in a stare down. But we know the sunset has already won. For you see, the cannons are already silent and one day they will rust and die but the sun will still rise, rise again to set the captives free, and the waves will still be rolling, rolling like a mighty sea.
This site is a multimedia platform for creative alchemy fueled by the joy and passion of MADJ. Copyright © 2021 MoHip. All rights reserved.